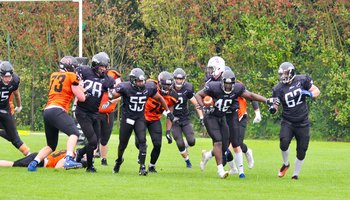 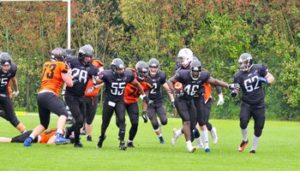 On Sunday 23rd June the Exiles faced off against the visiting Bristol Aztecs in the sixth game of the 2019 premiership season.
Following on from a convincing victory for the Exiles juniors over the Hertfordshire Cheetahs, the seniors looked to end the day in the same way their younger counterparts had started it, whilst also getting back on track with a win that would go far in determining their premiership status moving forward into 2020 and beyond.
This desire for a win was seen early from the Exiles offense, as they drove down the field on the first possession of the game off the back of excellent running from Dan Exell and Wes Eversley. Offensive linemen Adam Pearson, Joe Edwards, Gareth Rees, Daniel Gray and Jon Gadbury were relentless from the get go, placing the Exiles on the Aztec goal line only minutes into the game. QB James Cook would find TE James Bertram-Smith in the endzone soon after to make the score Exiles 7-0 Aztecs.
The Exiles defense would follow suit, forcing the Bristol offense to punt early and often, setting up a Harry Kent field goal that would extend the Exiles lead later in the first quarter to 10-0.
However, the Aztecs had come too far to roll over, as they put together a long offensive drive late in the first half that would result in their first points of the game. Exiles 10-6 Aztecs. With the Exiles offense unable to respond on the ensuing drive, the defense would once again be in position to make their mark on this game. After yet another long drive from the Aztecs put them dangerously close to the Exiles endzone, a forced fumble inside the 10-yard line would see former Exile junior Johnny Ndumbe scoop up the ball and run it back to the house for a 90-yard TD. The score couldn’t have come at a better time, as it gave the Exiles a 17-6 lead going into the half.
A strong finish in this game would be essential for both teams, as the Exiles looked to keep their premiership hopes alive whilst the Aztecs would be keen to avenge a loss at the hands of the Exiles earlier in the season. The Aztecs looked to take hold of this game early in the second half, as a long offensive drive saw the Bristol offense back in the endzone whilst also taking up most of the time in the 3rd quarter. Exiles 17-12 Aztecs.
Limited time on the field for the Exiles offense saw them unable to truly regain the momentum they had at the beginning of the game, and so it would once again fall on the defense to stamp out any hopes of an Aztec comeback. Interceptions from Jared Gray and Nick Mayer would keep the Aztec offense at bay, whilst strong tackling from linebackers Theo Coleman-Brown, Joe Alexis and returning Exile Eoin Hunt would help bleed the clock and force Bristol to score with less than two minutes remaining in the game. It was at this point that veteran safety Jay Henderson would make a game-sealing interception with under a minute to go to secure the Exiles victory. Final score: Exiles 17-12 Aztecs.
The victory will be huge for the Exiles moving forward as they hope to remain in premiership contention. Next Sunday the Exiles look to take on local rivals the London Olympians, as the men in black aim to avenge a week 1 loss to the South London side.

Thanks for coming to visit the Kent Exiles AFC News Centre. Check here for all the match updates and latest news. 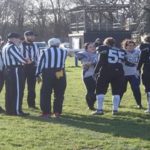